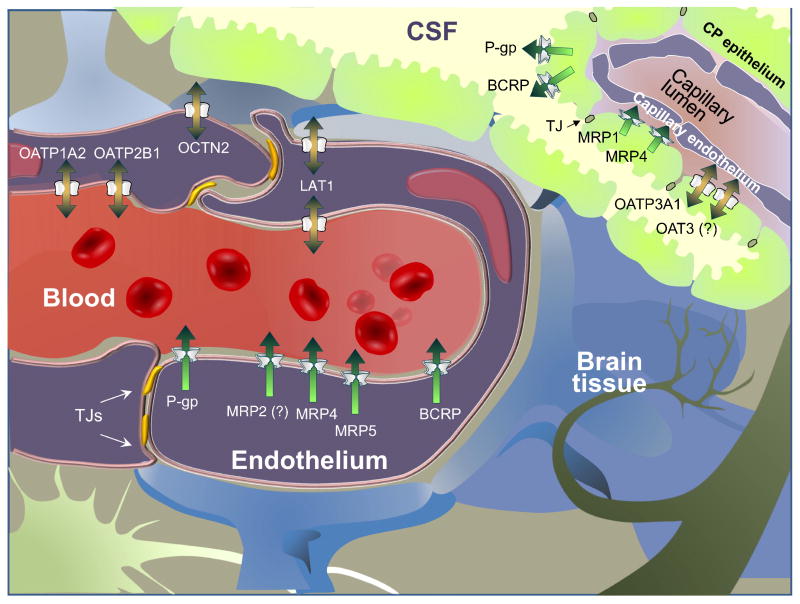 The BBB or Blood Brain Barrier is constituted by several cell types: endothelial cells, pericytes, astrocytes and neurons. and the fourth of them form what is named the neurovascular unit. This barrier separates the blood and the brain interstitial fluid and under physiological conditions, it regulates the diffusion of endoguenous substances and xenobiotics between both compartments and limits the passage of blood circulating endogenous substrates and larger molecules to the brain.

This intrinsic protective role is also a major hurdle for reasearchers developing drugs for Central Nervous System (CNS) disorders. In this context, one of the most critical challenges in drug discovery projects is to ascertain the permeability of new therapeutic agents across the BBB at the preclinical trials.

Most of the CNS acting drugs currently fail because of:

Drug efficacy is achieved by adequate exposure of an active agent at its site of action. Although passive diffusion is assumed to be the most important pathway, BBB permeability is tightly controlled by the cell-cell (non-fenestrated endothelial cells and pericytes) interactions and by the presence of efflux transporters which are highly expressed at the BBB and are responsible for pumping therapeutic drugs, toxicants and metabolic waste products out of the brain.

Several transmembrane proteins are involved in drug transport at the BBB. Among them, the most relevant receptors to consider are:

P-gp is a potent and efficient efflux transporter mainly expressed in the brain capillary endothelium comprising the blood-brain barrier. Pgp maintains overall CNS homeostasis by preventing the circulation of compounds, primarily amphiphilic and slightly cationic organic chemicals, therapeutic drugs and toxicants from entering the brain (neuroprotection) and by pumping metabolic waste products out of the brain (detoxification)…

Similarly, the BCRP transporter limits the penetration of substrates into the CNS. The expression of this drug exfflux tranasporter has been reported in pericytes, microglia, astrocytes, neural progenitors, and stem cells, and it is highly expressed in the luminal membrane of brain capillary endothelial cells.

In the brain, MRP1 protein expression has also been found in pericytes, microglia, astrocytes, neurons, the basolateral membrane of choroid plexus cells, and the luminal and abluminal membranes of brain capillary endothelial cells.

According to this expression pattern and substrate spectrum, it is considered that the main function of MRP1 is extrusion of glutathione, glucuronide, and sulfate metabolites, as well as cell protection against potentially harmful metabolites, xenobiotics, and drugs.

In order to optimize drug development and adapt the treatment to molecule pharmacokinetics, it is recommended to assess the in-development molecule interaction to P-gp, BCRP, and MRP1 receptors, to understand the pharmacological route and optimize clinical stages.

In vitro kits cultured with transfected clones which overexpress the relevant pharmacological receptors are considered standard techniques to evaluate novel molecules’ mechanism of action and safety, according to regulatory guidelines (EMA, FDA, and PMDA) and scientific research.

ReadyCell, as a specialized firm in cell culture and application in research, offers a complete range of products to ease the screening of novel compounds. Contact us at reagents@readycell.com for an open discussion with our specialized team.

← Prev: CacoReady in the literature Next: ReadyCell is expanding boundaries →