Hepatitis C virus (HCV) is a hepatic disease caused by an RNA virus that can lead to hepatic cirrhosis and hepatocellular carcinoma. The use of non-sterile medical procedures is the most common risk factor for HCV infection.

Until there is a prophylactic vaccine to prevent HCV, the infected population is treated with interferon and ribavirin, which respond favorably to about 50% of patients. For those unresponsive to IFN-based therapies, HCV is treated with a combination of new direct-acting antiviral agents (DAAs). Although, the combination of these drugs has been found to be highly effective, above an 80% rate, preclinical studies have identified significant risks of drug-drug interactions (DDIs) especially for those patients with higher number of co-medication. Inhibition of the organic anion transporting polypeptides (OATPs) and the multidrug resistance protein 2 (MRP2) are some examples of DAAs interactions.

How do transporters act in liver drug/endogenous substrate elimination?

OATP1B1 and OATP1B3 are two influx transporters of the SLCO gene family that are primarily expressed in the sinusoidal membrane of hepatocytes. They both play a key role in the pharmacokinetics of various drugs as they are involved in the uptake of a broad range of xenobiotics, drugs and substrates. For instance, impaired elimination of unconjugated bilirubin by DAAs is the result of a potent inhibition towards OATP1B1/1B3 and a mild inhibition on MRP2, a membrane transporter localized in the hepatocyte canalicular membrane. Consequently, there is an increase in plasma bilirubin, a clinically relevant adverse event named hyperbilirubinemia.

To identify drugs that may induce hyperbilirubinemia it is recommended to monitor drug interaction with OATP1B1/B3 and MRP2 transporters. Fluorescent probes such as pyranine, Cascade Blue hydrazide (CB) and sulforhodamine 101 (SR101) have been used to rapidly characterize uptake and efflux transporters in Madin-Darby Kidney cells type II (MDCKII) overexpressing these membrane proteins. Although fluorescent dyes are probably non-specific and could be substrates of other hepatocyte transporters, the data obtained in the fluorescent-based assays can be applied to evaluate DDI potential drug candidates. Combining in vitro data and clinical outcomes will strengthen the predictive power of these trials.

To ascertain whether a drug’s hepatic uptake into the liver exert a pharmacological effect, the US Food and Drug Administration (FDA) recommends conducting uptake in vitro assays in OATP1B1/1B3 transfected cells. According to the guidelines, an investigational drug will be considered a substrate of these transporters when drug uptake will be twice than the cells expressing the vehicle or an inhibitor when it will decrease drug uptake by 50%. 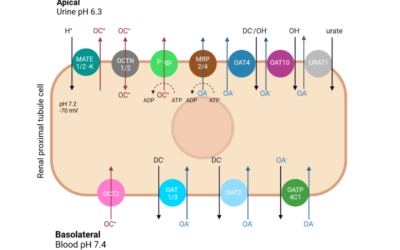 Understanding the role of these transporters in the clearance of new molecular entities (NME) is normally performed in-vitro at the early stages of drug development.

It is well known that food intake changes luminal conditions (e.g. pH, motility, microbiota,…) in the stomach and the small intestine, modifying drugs bioavailability. Food-drug interactions are one of the major challenges for oral-administered drugs, even more so if considering the growing use of food supplements and functional foods.